Abstract. Multiwall carbon nanotube aggregation by the high-voltage discharge was investigated in a liquid element-organic medium. A carbon aggregate oriented along the electric field was obtained. Structure and properties of the samples was studied by conductometry, scanning electron and optical microscopy.

Carbon nanotubes have attracted great attention of researchers since 1991 [1] due to their unique physical and mechanical properties. For the synthesis of nanotubes methods are conventionally used such as arc discharge in an inert gas [1,2], or in an atmosphere of hydrogen [3], laser ablation [4,5], chemical vapor deposition [6-8] on iron, nickel or cobalt. Traditional arc discharge requires complex of vacuum systems and heat removal.

Arc discharge in liquid media is a relatively new method for the nanotubes synthesis [9-12]. For this purpose a direct current power source and a vessel filled by liquid nitrogen, deionized water or NaCl solution are used. This method does not require vacuum equipment, reaction gases, high temperature and heat transfer systems. Multiwall carbon nanotubes (MWCNTs) were first obtained in this way in liquid nitrogen [9]. In a work [12] MWCNTs were prepared in the NaCl solution. Long-term stable arc at a current of 50 A and a voltage of 26 V was maintained due to the high conductivity of the salt solution.

The arc discharge in the liquid phase is also used for a chemical modification of carbon nanotubes [13].

Main purpose of this work is investigation of MWCNTs long aggregates preparing process in a liquid phase, which induce by arc discharge.

A glass cell of special design with soldered capacitor connected to the high voltage generator was used in the experiments (Figure. 1). Steel electrodes were used as the capacitor plates. 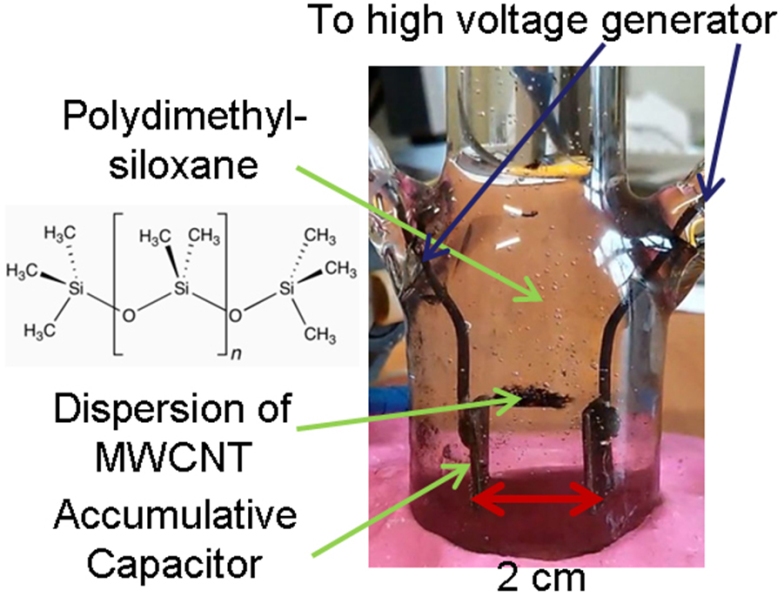 Figure. 1 Sketch of the lab plant.

A non-conductive liquid organic medium, namely nonflammable silicone liquid with high viscosity, was used as the liquid phase. MWCNT of the brand Baytubes® C 150 P (Bayer) were used. Structure of the nanotubes was studied by scanning electron microscope S – 520 (HITACHI, Japan). The MWCNTs were pre-dispersed in a solvent by ultrasound using an ultrasonic bath "Sapphire" with a frequency of 35 kHz. The solvent is selected in such a way that it is not mixed with the silicone liquid.

The MWCNT aggregation was carried out by a high-voltage (15 kV) arc.

These electron micrographs (Figure. 2) show that the initial MWCNTs are three-dimensional aggregates of the nanotubes with sizes of 300-600 micron, which consist of extensive tangled fiber-like nanoparticles with thickness of about 0.05 micron.

When crushing these aggregates of the nanotubes suspension by ultrasound these tangles were broken down into smaller aggregates. Figure. 3a-d shows that the MWCNTs after treatment spontaneously form elongated aggregates easily destroyed by mechanical action, their width is of about 10 microns and the length of 100 microns. These aggregates are formed by smaller agglomerated particles of less than 1 micron. They can be found in the form of points that make up elongated objects (Figure. 3d).

Figure. 3. Microscopic images of the MWCNT samples in the solvent after sonication.

The following processes occur successively in case of an interaction of the nanotube dispersion droplet with the electric field (see. video file):

The resulting arc-shape aggregate was rather brittle; while crushing it produces a characteristic crunch, like sound of crushed broken glass, that apparently indicates on its micaceous structure.

Color of the formed plates was from yellow-brown to dark brown with black inclusions. Apparently, the plates was mica with inclusions of an amorphous carbon and the nanotubes aggregates (Figure. 4).

Figure. 4 Photos and microphotographs of the aggregate obtained with different magnification.

It can be assumed based on the above analysis and microphotographs (Figure. 4) that the structure of the obtained arc object was covered with layers of mica branches of the MWCNT aggregates. The bond’s strength between the nanotube in aggregates and also methods of regulation of it are a question for further research.

This method of obtaining of aggregates from carbon nanotubes was protected by authors at the RF patent [14]. It is assumed that this approach can be used for produce special carbon fibers.

The multiwall carbon nanotubes aggregates formation process was investigated in a liquid environment. A carbon aggregate oriented along the field was obtained and its morphology was studied by optical microscopy. It is assumed that such aggregates can be used in hi-tech, microelectronics and nanotehnology, for example, to design carbon nanofibers with special properties.