Applicability of methods and technologies of drip irrigation in Azerbaijan

Institute of Erosion and Irrigation of Azerbaijan National Academy of Sciences (Azerbaijan, Baku)

Abstract. With the proper conduct of the process low-intensity irrigation can not only dramatically reduce the consumption of water for irrigation agricultural crops, but also to provide the necessary climate for the plants and the supply of water and fertilizer in the required amount directly into root habitation zone, which contributes to an earlier entry of plants in fruiting and increase productivity while reducing water per unit of yield and reduce production costs.

Methods and technologies of drip irrigation in Azerbaijan

At the present stage of development of irrigated agriculture in our country highly efficient use of irrigated land is only possible with the implementation of modern progressive water-saving irrigation equipment and technology.

When addressing of this important issue a special place is occupied by water management, heat, nutritions, soil salinity determination in order to maximize the cost per unit of output.

In recent years, new ways of water allocation are researched all over the world to satisfy the watering of plants more fruitfully.

Regulation of water and associated air, heat, nutrition, and soil salinity conditions causes the development of physico-chemistry and other aspects of the processes proceeding in the soil and determination of their area. Improper irrigation stressful influence may lead to destruction of the structure and permeability of soil aggregates that reduces soil fertility. It should be noted that certain types of irrigation have an impact not only on the ground but also on the ground layer of air, as well as directly to the plant, that is, this techniques regulate its water regime and photosynthetic processes, including the foliar feeding with watering the aerial parts of the plant. It should also be noted that the introduced equipment and technology should be environmentally friendly.

Environmental safety of irrigation should be based primarily on water-saving technologies for the fullest possible use of natural precipitation, optimization and standardization of water supply, elimination of water losses in the discharge of the surface and deep filtration by creating appropriate conditions.

For the purpose of rendering environmental safety of our irrigation new techniques and technologies of drip irrigation are considered perfectly fitting.

Water supply mode depends on the norms, conditions and duration of irrigation depending on irrigation period, humidification zone, flow, number of drippers, their locations and water-physical properties of soils.

It is known that for drip irrigation water is fed in the form of individual droplets of 1-2 mm in diameter or in the form of jet directly to the local point on the surface and is redistributed on the area, moistening the soil, mainly with capillary forces.

The degree of perfection of irrigation techniques can be assessed when considering them as part of the entire irrigation industry.

Increase in the water delivery of irrigation equipment with increasing productivity leads to an undesirable increase in the intensity of the rain, and ultimately, to unacceptable environmental consequences, and increases the usage of the water-supply network, so increasing its capital and maintenance costs as well. The main purpose of creation and introduction of drip irrigation technology is the achieving of optimal dispersion and uniform distribution of water flow in the process of transfer to soil and air moisture. As noted above, if there is no different opinions for the question of uniformity of water distribution (the higher the coefficient of irrigation efficiency, the higher the yield), then the question of the rational degree of dispersion for current water until recently there was no such unanimity. Indeed, if we compare the intensity of the water supply and the intensity of evapotranspiration for different irrigation techniques, their attitude varies from 1 to 1000, with lower values ​​correspond to low-intensity irrigation techniques.

The key output parameters for the calculation of the intensity of the water supply are the duration of precipitation, evapotranspiration and their intensity.

The daily water supply is determined according to the amount of evaporation from the water surface, and is calculated by the following formula:

Where Etpd- evaporation of the previous day, mm;

moisturizing factor of the square is defined by expression

Where S - humidification of the area,

The duration of the water supply is determined by the formula:

Where Tday is the daily duration of operation of the system is quenched;

In formulas 1 and 4 function Kfa has significant influence to determine the technological irrigation process. This complex expressions productively use rainfall.

The utilization of precipitation functionally depends on the intensity of the rain, the initial moisture content, soil type, slope of the terrain, the length of the rain and the surface condition of the soil.

It should be noted that if the groundwater is close to the inhabited layer of the soil then the daily water supply should be determined by the following formula:

Where K2 is the utilization of groundwater.

The value of K2 depends on the observations of the depth of groundwater, water-physical properties of the soil and the depth distribution of the root system of plants. We offer two methods for the process of crops irrigation.

The first method is based on the traditional technique.

According to the method in the absence of rain the supplied water should resupply its daily loss in accordance with the prior diurnal evaporation. It uses evidence of GTI-3000.

At the beginning of the irrigation season, and after every rain initial moisture content of the soil is measured. This irrigation method is accurate enough.

The second method is also based on daily replenishment of soil moisture reserves for the required value according to evaporation in the previous day in terms of evapropation measurement GGI-3000.

Soil moisture (initial moisture content) is determined by calculation. This method is based on the theoretical and experimental curves for determining the effectiveness of fallen rain. The calculation takes into account the dependence of the water and soil properties (the ability to elicit), and rain parameters (intensity, duration).

Where H is the calculated volume weight of the soil layer, t / cm2;

N   is the depth of the active layer of soil m;

ß- soil moisture as a percentage by weight of dry soil.

If we consider that to be determined by the following formula for the heavy loam soil moisture equal to the lower limit of ßmin = 80% NV, and the upper limit of 100% ßmax NV, the optimal conditions for these soil moisture:

That is for the heavy loam soil is optimal humidity is 90% NV. Then the calculated moisture content of the soil layer, the corresponding optimum moisture ßopt = 90 NV gets the following form:

The same method can be used to determine the optimum moisture content of the soil layer is calculated for other soil conditions (light, medium, etc.).

Irrigation technology under drip irrigation should be carried out as follows:

At the beginning of the growing season the initial moisture content and the corresponding water content ßo , Po are determined in the settlement layer of soil, and the soil moisture content is measured by one of the exact methods.

If Po> Popt the daily irrigations carried out after all it is the soil moisture reserves Po will not fall to the desired level.

Irrigations (daily rate and duration of watering) is carried out in terms of evapotranspiration. For this purpose, see the IP section of GGI-3000.

If the previous day evaporation from the soil, for example, is 5 mm of moisture, then the day in question in drip irrigation technique 2.5 mm (25 m3 / ha) is applied to the soil,\ and finely divided, and for traditional irrigation technique 5 mm (50m3 / ha). This is because under drip irrigation not the whole territory is occupied by crops. Only locally irrigated areas close to the plant root system are watered. The length of the root system is determined by nomogram 1. 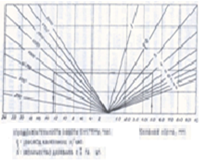 Fiq.1. Nomogram for determining the length of the work system

During the without rain season such procedure is repeated every day.

In the rain, in two or three days after the rain, soil moisture is measured on the basis of the following formulas.

The difference between the Po and Popt or soil to make a one-time rate of watering.

Popt - Po (Popt - Po) or until the next growing watering should wait until such a day from the soil to evaporate the difference, that is:

Evapotranspiration measurements and duration of daily watering are published in a special magazine, where the parameters of technological irrigation process are determined by the nomograms 1-4. 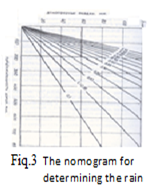 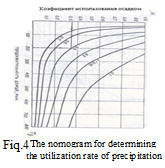 These nomograms are developed for heavy loam soil. The slope of the terrain is considered zero. In the construction of the nomogram for determining irrigation norms m soil moisture coefficient was taken equal to 1. This expands the scope of this nomogram and other irrigation methods. With drip irrigation resulting nomogram normal watering adjust the size of the soil moisture factor, m = m · Kfa

Nomograms Fig. 1-4 allow irrigators to determine the parameters of the technological process of irrigation without making measurements of soil moisture.

To reliably determine the process of watering should consider some of the specific case, that is not rainy and rainy periods.

Without watering the rainy period is carried out as follows.

Km = 1, and under drip irrigation.

For the rainy period the process parameters are as follows:

According to well-known Te and P using the formula (10) one can build a nomogram of rain intensity. Figure 1 shows a nomogram for determining the intensity of the rain. With well-known Te and intensity of rain can one use nomogram Fig. 2 to determine the utilization of rainfall. Next, using the nomogram in Fig. 3 on the known values ​​of liters, Etpd and P can be found - the desired rate of watering places for soil moisture to the optimum level.

Usually after the rains the current level of moisture reserves in the soil becоme more than required, since before the rain, soil moisture is maintained at the optimum level. The problem is then reduced to determining the current value of soil moisture reserves after the rain. At the same time soil moisture reserves after the rain are increased by the amount of precipitation effectively sunken in the deep layer. Regular watering of the crops is made after evaporation from the soil exceeds natural precipitation. Thus, the proposed method determines the parameters of the technological process of irrigation, and allows the most productive use of precipitation for practical application. It is sufficient to identify the needs of irrigation rate and assign the timing and duration of the system.

The above recommendations for the operation of drip irrigation systems and irrigation technology can be used effectively in a variety of climatic conditions of Azerbaijan.

Providing substantial growth and development of crops on account of the introduction of drip irrigation systems with the use of mineral fertilizers together with the irrigation water in the favorable conditions of Azerbaijan. Adding mineral fertilizers through drip system is much more efficiently than by any other method. The proposed drip irrigation systems compared to traditional dominant republic irrigation methods are very promising, thus allowing plant irrigation continuously during their growing season, taking into account the conservation of ecological equilibrium of the environment.

Ensuring substantial growth, cultivation and harvesting on account of the introduction of drip irrigation systems with the ability to use mineral fertilizers together with irrigation water is favorable in Azerbaijan. Adding mineral fertilizer through drip system is much more efficiently than by any other method. What is proposed by drip irrigation systems as compared to the traditional dominant method of irrigation in the country is very promising, thus allowing plant irrigation by water continuously during their growing season with a view to preserving the ecological balance of the environment.

7.Guseynov NM Ways to improve the efficiency of use of irrigated land, improved technologies and methods for irrigation of agricultural crops in Azerbaijan. // Report on the degree of competition. C. c. D. on the basis of works, Baku, 1969 s.214-230.