Institute of Erosion and Irrigation of Azerbaijan National Academy of Sciences (Azerbaijan, Baku)

Abstract. The paper presents the results of soil-ecological and geobotanical studies of the main soil types in the Sheki region, which characterizes the natural conditions and diagnostic indexes of soils in vertical zonality from intrazonal landscapes to subalpine meadows.

It is believed that the anthropogenic transformation of the biosphere in a certain sense has the nature of a global catastrophe and anthropogenic landscape is the landscape of the future. Apparently, in 100-200 years it will occupy the entire territory of the earth's surface with the possible exception of eternal ice and mountain peaks. The reasons for this lie in the uncontrolled and progressive growth of the population of the Earth, in the nonstop expansion of industry and agriculture, in the constant need of man for energy sources, other processes that accompany the "triumph of civilization" [7].

Studies have shown that soil, as an integral part of the ecosystem, is also an important component, the formation of which occurs in the interconnection and interaction of environmental factors in the Sheki region, which corresponds to vertical zoning.Selected in the form of an object of study, the Sheki region, located on the southern slope of the Greater Caucasus (Fig. 1), borders on the north and north-east by the main watershed ridge of the Greater Caucasus, in the west by the Gakhsky, in the east by Oguz regions, between elevations of 500 - 850 m, Sometimes reaching up to 3000-3500 m above sea level on snowy peaks and occupying a total area of ​​2432.75 km2. [3]. 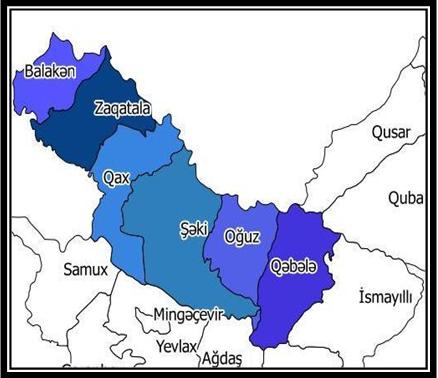 Fig1. With the boundary regions of the Sheki-Zakatalinsky districts.

Geologically and geomorphologically, the region has a fairly complex structure, where high mountains and steep slopes alternate with foothills and plains, which in turn contributes to the development of a fairly variegated climate, then to a variety of vegetation cover. The complexity of the geomorphological structure, the presence of steep slopes, as well as anthropogenic impact, exerts a significant importance to the intensity of surface runoff, which in turn enhances the development of erosion processes, resulting in the creation of wide ravines, which in the final stage are represented by beams, changing the geomorphological appearance of the region as a whole.

The highlands are located at an altitude of 2000-3500 m above sea level. The relief is represented by a strongly dissected erosion-denudation form. Soil-forming rocks mainly consist of clays, limestones and shales. This zone is characterized by intense mudflows, causing significant damage to the environment, especially in the destruction of soil fertility.

The mid-mountain region is located at an altitude of 1000-2000 m above sea level and is characterized by the presence of a dome-shaped and stepped watershed. The slopes of the mountains are strongly dissected and the erosion-denudation relief dominates. Soil-forming rocks are represented by shales, limestones and sands, basalts, gabbros, hydromica, andesites are found.

The low mountain range is located between isogypses 600-1000 m above sea level. The surface is represented by narrow belt islands, separated by wide valleys. Soils are formed on the deposits of the Jurassic and Cretaceous periods of the Mesozoic and 3-fold (Paleogene, Neogene) and 4-period Cenozoic.

The plain zone is located at an altitude of 200-600 m above sea level, where mainly alluvial-proluvial deposits are located, on which fertile soils intensively used in agriculture are developed.

In general, according to Sheki-Zagatala zone, EM Shikhlinsky [7] distinguishes 3 types of climate:

1) moderately warm, characteristic for flat areas of a zone with a relatively mild winter;

2) moderately warm wet type with a uniform distribution of precipitation throughout the year, covers the foothills of the zone;

3) cold climate with humid winter, characteristic for the foothill and mountainous area of ​​the zone.

The average annual relative air humidity is 71% fluctuating over the season from 59 to 87% [7].

Large rivers of the zone also include p. Ayrichay, Kishchay, Ohutchay, Garasu, Beyuk gobu, Shinchay, etc These rivers with sleeves, especially on steep slopes, erode the soils under forest and meadow formations, which is particularly intense in the period of prolonged and intensive precipitation. The complexity of natural conditions and the diversity of the hydrothermal regime, contributed to the formation of various types of soil, differing in genetic properties. The soils of the region under investigation were studied in detail by academician G.A. Aliev [1, 2].

Based on field and laboratory studies on the mountain pastures of the region, the following types and subtypes of soils are distinguished:

The leached primitive mountain meadow soils are spreading on different sites of summer pastures, covering 1893.0 hectares or 0.76% of the total area of ​​the region.

The relief of the region under investigation is strongly dissected by a ravine-beam network, where the soil-forming rocks are represented by deluvial deposits, and the soils are used for grazing.

In accordance with the granulometric composition, the hygroscopic moisture according to the profile tracking fluctuates between 2.7 - 4.2%. The leached primitive mountain meadow soils are sufficiently provided with organic substances, where the humus content in the upper layer is 5.37-5.67%, and in the lower layers 5.02%, the total nitrogen value for the soil profile 0.27-0,38%.

The absorptive capacity of leached primitive mountain meadow soils is different, where the sum of the absorbent bases (per 100 g of soil) along the profile is 24.50 - 32.98 mg. Eq.

Leached soddy mountain meadow soils amounting to 6781.6 hectares or 2.73%, are distributed in different parts of summer pastures. The relief of the territory is expressed by gradually declining to the northeast slopes. Leached soddy mountain meadow soils are also rich in organic substances, where the presence of humus varies between 7.35-10.0%, and total nitrogen 0.37-0.50%.

Leached dense soddy mountain meadow soils make up 4033.9 ha or 1.62% and are distributed in different places of summer pastures.

The territory is dismembered in various directions. Soil-forming rocks are represented by proluvial-deluvial deposits. The territory is used only for grazing. These types of soils here are of medium-loamy granulometric composition. The presence of fractions (<0.01 mm) of physical clay along the profile fluctuates between 42.12-45.65%, physical silt (<0.001 mm) 9.40-11.80%, and hygroscopic moisture 4.3-4.5 %. Has sufficient supply of organic substances. The presence of humus in the upper layer of soils is 10.37%, slightly decreasing to the lower layers of 9.51%, the content of total nitrogen along the profile is 0.46-0.52.

The absorption capacity of leached dense soddy mountain meadow soils is different, the sum of which varies from 30.40-40.60 mg. Eq. Over the soil profile. After gaining independence in the Republic of Azerbaijan on 16.06.1996 Milli Mejlis passed the Law "On Land Reforms" on the basis of which three forms of ownership were distinguished: a) state; B) municipal; C) private property [5].

Summer pastures being state property, in exceptional cases according to the established legislation, can be used and provided for rent. The allocation of these soils to the municipality and to private property is also established by law. Along with other factors of soil formation, the vegetation cover also plays a significant role. Vegetable residues creating humus, which is the basis of soil fertility, also plays a significant role in soil formation, Taking upon themselves the destructive effects of atmospheric precipitation, neutralizes their actions. By absorbing the bulk of the precipitated precipitation, the vegetation cover creates the conditions for their further absorption into the soil, preventing the action of surface runoff.

As noted above, the summer pastures of the Sheki zone are located in the highland zone at an altitude of 2000-3000 m above sea level and differ sharply from the neighboring regions of the zone according to the species composition of the plants. The study area of ​​the zone was from north to south at a distance of 50 km vertically. Along with the desert vegetation, there are meadow, alpine and subalpine plants. It should be noted that about 70-80% of plant communities of all plants of the republic can be found on the territory of the zone.

Vegetative groups of the region are formed in accordance with the soil-climatic belt. In connection with this, in the dry steppes of the low part of the semi-desert (lowland belt and foothills) xerophytic plants, shrubs and rare forests are widespread, in the highland zone subalpine and alpine meadows, where regular zoning is observed in the plant cover.

At the same time, in the Sheki region, introsonality is also traced in the Ghanyh - the Irichay valley, whose vegetation is to a certain extent cultural and marsh plants at what in the lower tier at an altitude of 400-600 m. Above the sea level, it is rare to find cultivated plants. At an altitude of 600 m above sea level, mountain forests (the lower and upper tiers of the belt) are widespread, and above (1800-3000 m) there are subalpine and alpine meadows, and even higher rocky landscapes, which because of the severity of the climate and the presence of steep Slopes are less susceptible to anthropogenic impact.